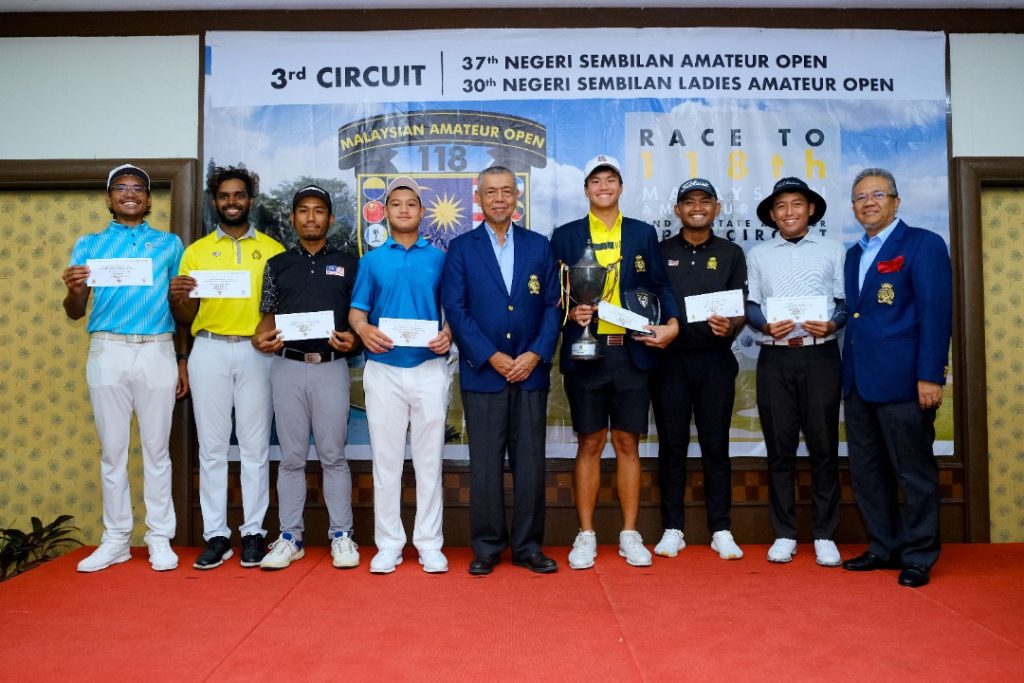 Sarawak’s Mirabel Ting continued to shine at Nilai Springs Golf & Country Club
Marcus Lim dominated the field by carding 10-under-par 206 tournament total to clinch the victory at the 37th Negeri Sembilan Amateur Open 2022 and won RM4,000.00 cash prizes. He carded 70, 70 and 66 for the 3-day tournament.
“I am very happy to win again at this Circuit before I leave for the USA”, Marcus Lim said. “I hope to be able to continue winning in other events especially the Asia Pacific Amateur Championship this October at Thailand.”
Overnight leader, Rhaasrikanesh Kanavathi who carded 3-under-par 69 yesterday had to satisfy with 4th place after scoring 1-over-par 73 for 4-under-par 212 tournament total.

“It was not a good day for me today”, Rhaasrikanesh said. “It is a bitter pill to swallow after leading for the first 2 days. I will remember not to make the same mistakes in my next events.” “It’s a very good day indeed to see a lot of top players to play in our state open,” said Tan Sri Mohd Anwar, President of MGA. “It augurs well for the development of amateur golf in the
country and the region.”

The Negeri Sembilan Amateur Open is one of the premier amateur events in the country which is part of the World Amateur Golf Ranking counting events. Nilai Springs Golf & Country Club was given the honour to host this year’s edition from 16-18 August 2022. This event was hotly contested among the players as it is used as one of the qualifying rounds for the 118th Malaysian Amateur Open to be held later this year.

Mirabel Ting who returned with the lowest score of the event with a 5-under-par 67 took home the ladies division title with 13-under-par 203 tournament total. Mirabel Ting carded 68, 68 and 67 to win the title. This is her second win after winning the first circuit at the Penang Amateur Open held at Penang Golf Club from 26-28 July 2022. “I won the first and third state amateur open of the season. It’s awesome,” said Mirabel. “I am very happy to win and hope that I will do well in the USA when I start my NCAA program in
Augusta this coming September.” Foong Zi Yu of Selangor finished second who carded 4-under-par 68 today for 1-under-par 215 tournament total followed by Winnie Ng who carded 1-under-par 71 today for 1-over-par 217 tournament total.